A dead buffalo, other wild animals and breathtaking bush sunsets

A group of us, including three generations of the Pieterse family, visited the Caprivi strip for a little bush adventure. We were camping deep in the bush and had lined up a war veteran as a guide, so that we could safely go on walking safaris rather than the usual game drives.

We met our man close to Katima Mulilo and off we missioned. About an hour en route to where we would set up camp our little convoy drew to a halt and the guide hopped out, saying that he had spotted a buffalo stuck in the muddy banks of a water hole a few hundred metres from us. He told us that all the guides in the area had been on the look out for an injured buffalo, and that he wanted to take a closer look to see if it had in fact died. 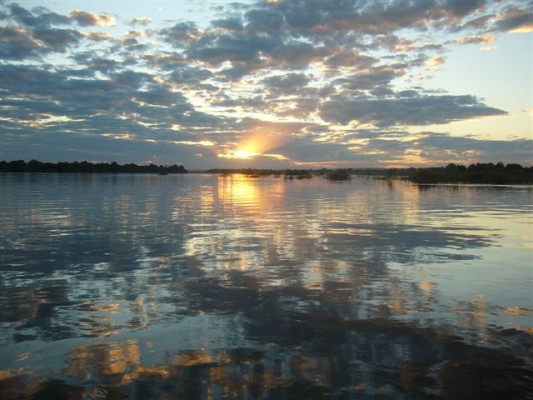 He asked who of us would like to accompany him, and of course I stepped right forward, eager to participate in this adventure. Only men, he said. And only two. My words failed me, and all I could do was give him my very best disapproving, yet highly ineffective Chrissi stare. His steely return clearly communicated no discussion. In the end Christo Pieterse and Marinus were the chosen ones, with the rest of us crowding around, and atop, the vehicles, watching as the two warriors and their leader departed to inspect the vital signs of said buffalo.

About halfway there the going got a bit marshy and our two boys took off their shoes, neatly placing them next to a small rock. A little further on and the three dropped to the ground. Another twenty metres or so and the two were told to stay put, with our man executing a perfect leopard crawl to cover the rest of the distance required to creep up behind the beast.

It was difficult to see exactly what was going on from where we were, but the two pairs of binoculars being passed around were accompanied by a running commentary on the mission’s progress. Goodness, he’s taking out a revolver now. Maybe the buffalo is still alive. I wonder if he’s going to shoot the animal? Doesn’t it have like a really hard skull?

The buffalo had not moved a muscle.

Kaboom! As the shot resounded across to us we watched in stunned horror as the dead buffalo with the broken leg furiously reared itself out of the mud. Almost simultaneously Christo and Marinus shot out off the starting blocks in a mad race back to the vehicles. Christo ran straight over their shoes but somehow Marinus had the presence of mind to bend down mid sprint to collect both pairs. We noisily welcomed them back like two home-town heroes, and then all watched in muted silence as our guide returned, also unscathed. We had just clocked our first Caprivi memory.

The next morning I was woken by the magical sound of a ground hornbill, and as I lay in a trance in the rooftop tent I wondered what adventure this day would bring. After breakfast and ablutions we set off on the day’s mission which included tracking a herd of elephants and seeing if we could get close to some hippos in a pool.

It was tremendously exciting literally walking in the footprints of these large mammals and following their trail through the river. But I am my mother’s daughter, and drew the bravery line at getting too close and personal with a hippo pod. They may look like cutesy Heffalumps but are fast as hell, so I hung back while every one else confidently flanked our man. I carefully plotted how I could escape from the rear, without loosing too much face. Should they come charging out of their tranquil hippo pools, I calculated that I could grab the lightest child and still run faster than hell, later claiming to have had only the child’s interests at heart. Fortunately I never had to implement this strategy.

The next day it was the turn of the lion. We were going to track another herd of elephants but our man had also said that it was possible that we would encounter a pride of lions. He briefed us on the appropriate behaviour, which I promptly forgot while processing our sortie, so on this day I was practically glued to his side up front. I’m sure all of us were filled with a mixture of anticipation, and apprehension that we may really come across a pride… admittedly I was secretly hoping that we wouldn’t, as I wasn’t confident that we were suitably well-equipped to handle the encounter… The Lord must have heard my prayers, as no lions were to be found. We did however play around-the-tree tag with a perturbed young male elephant who was as surprised to see us, as we were to see him.

In spite of the moments of high adventure and adrenalin, a constant feature of this trip was the incredible peace of mind that comes with spending down time in Africa. Our bush adventure was full of fun, laughter and bonding; the mosquitoes were rabid; the bush sunsets breathtaking; and observing game from a (mostly) unobserved view point was an absolute privilege.

We all left for home richer people, made wealthier by the experience and with an air of content, as well as a strange sense of achievement, despite not really having done much… except exist.

(in case anyone is concerned about the welfare of the buffalo, the guides launched a little mission to find him, and put the poor animal out of his misery) 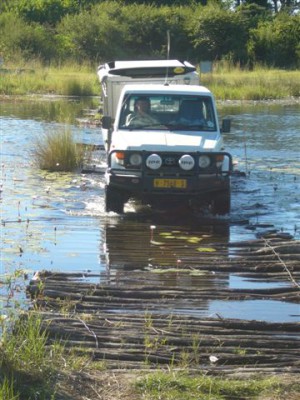