A lifetime of change, in just twenty-six days

Eighteen-year-old Khady’s face lights up as she keeps a close eye on the movements of her first-born. Fatimata appears to be a well-rounded toddler and quite comfortable in her new environment. She babbles and gurgles happily as she tracks movement in the Africa Mercy’s hospital admissions room. Until it’s time for her pre-admission check-up.

The tears start. And who can blame Fatimata? The nurses are gentle and kind, and do their best to soothe her. But it’s cold on the scales, it’s no fun being measured, and it’s all so very new. The concerned expression that crossed her mother’s face demonstrates how in tune to her little one’s wellbeing Khady is. Thank goodness the discomfort is quickly over, and peace is once again restored. 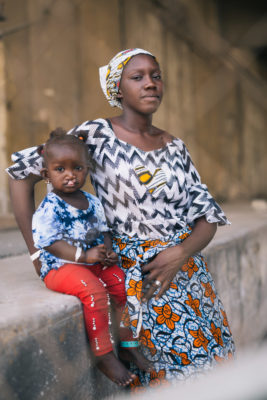 Khady is the youngest child in a big family and one day she would also like to have a large family of her own. “At least another six children,” she says, looking over at Fatimata with a smile. She was very excited at the prospect of becoming a mother and when her daughter was born, it was love at first sight. Sadly, not everyone felt the same way about her little girl’s birth defect, and the villagers would often laugh at her baby’s cleft-lip. This resulted in Khady spending more and more time at home, alone with her daughter.

Her desire is for Fatimata to have the opportunities that were never afforded her. “I have not been to school, and I want to give my daughter the chance to go to school,” she says.  The potential teasing and unkind, thoughtless words that she may have had to endure, did not bode well for this dream.

Khady first heard about Mercy Ships coming to Senegal on a local radio station. She trusted the message of hope and healing that she had heard on the news and visited the nearest city center, where medical volunteers were busy with the patient selection process. Fatimata was given a date to see a surgeon on the ship.

A few weeks before the operation the two travelled over five-hundred kilometers from Matam to Dakar to check into the hospital outpatient extension, known as the HOPE Center. Sometimes babies with cleft-lips struggle to breastfeed, and therefore don’t get the nutrients they need. The medical staff felt that Fatimata was too small for surgery, so she was put on a feeding program to ensure she gained sufficient weight, to support her little body through the healing process.

Finally, she achieved her target weight, and together with all the other patients at the HOPE Center being admitted that day, they set off to the Port in a Mercy Ships vehicle. “When I arrived on the dock and saw the Africa Mercy in front of me, my greatest hope was to see my daughter healed, and for the surgery to be successful,” says Khady.

The surgery itself went as planned. Back in the ward Khady’s anxiety is written all over her face. Her toddler is fast asleep, and blissfully unaware of recent events. To give her little body an even further boost she is being fed via a nasogastric tube, which carries food and medicine straight into her stomach.

Twenty-four hours later, Fatimata is up and about, and moving at a pace that is hard to reconcile with the fact that she has just undergone reconstructive surgery. She is discharged back to the HOPE Center, with the instruction to return to the ship for a scheduled mid-week checkup. 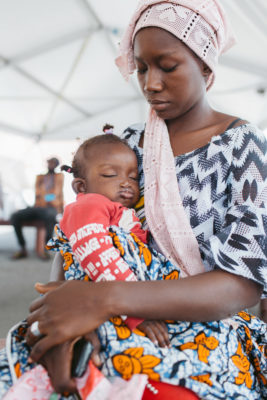 Seventy-two hours after being discharged from the ship’s hospital Fatimata and Khady return, in order for the nursing staff to check on her progress. Her stitches are healing well. She really doesn’t like having her face cleaned prior to the ointment being applied, and is almost inconsolable, until the appearance of a pink balloon cheers her up.

Khady is restless. It’s been a while since Fatimata has seen her father, and she is looking forward to the reunion and bringing her beloved daughter home. “I will always remember Mercy Ships and the people at the HOPE Center, especially those who became friends with Fatimata,” says Khady. “I’ll remember the environment and the compassion and love of those who took care of us.”

Finally, it’s time for Fatimata and Khady to begin their journey back home. It’s been twenty six days since they arrived at the HOPE Centre. Seven days since they first arrived on Africa Mercy. How Khady will explain the little scar above her lip to Fatimata is an unknown. A near certainty, however, is that as she grows older, the healing that took place during her short stay on the Africa Mercy will last a lifetime.

The above is the first patient story I wrote while onboard the Africa Mercy in Dakar in January 2020. This is the unedited version. The photographs used here were taken by John Seddon, a videographer and photographer from the UK (before photo), and Lara Arkinsal, a photographer from Australia (after photo).

The “things" in Zackaria’s eyes

When they were given a date for cataract surgery onboard the Africa Mercy, seven-year-old Zackaria asked his mother: “Is it…

What are the odds?