It was Vera’s birthday on Friday, and it was such a treat to have a family get together and to physically be in the same eating venue (@Mami&Papi) as multiple other heartbeats. When I got home, I felt like a child coming down from a sugar high… that slightly directionless, “what to do now?” feeling after all the guests have left and the cake has been consumed…

Luckily Saturday mornings is my weekly “hard-core” cycle with Birgit, my landlady, so I could work off my three (yes, three, plus cream) pieces of delicious mom-made cake. Yesterday’s bike ride took us to the Voortrekker Monument, where we treated ourselves to a cappuccino after cycling the route that was once part of the park run. Peddling up the dreaded “uphill” was beautiful: we passed some gnu, the birds were tweeting, the vegetation was thick, the clouds were low, and a cool breeze was blowing up the hill. It was just magical. 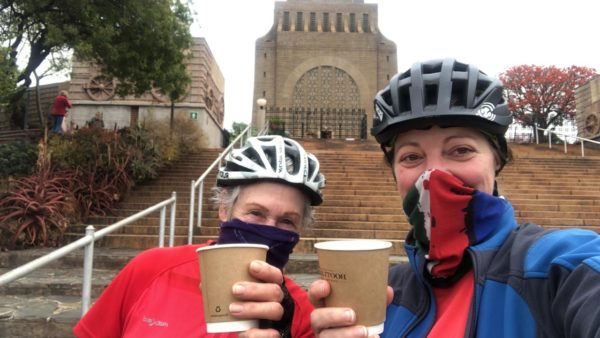 On our way home we encountered at least three groups of motorcyclists riding to the Union Buildings to raise awareness for farm murders and racism. I stopped on a bridge to take in some of the solidarity passing on the highway below. I, like many, am incredibly disappointed, disillusioned and feeling despondent about the way our government has been handling, in particular, our country’s financial matters. And right now, any demonstration or indication of solidarity tends to leave a lump in my emotional throat.

This week Herman Mashaba launched a new political party – Action SA. I’m thrilled to see a new warrior in the colosseum, as it’s high time for some fresh air to sweep through those putrid South African political corridors. I’m just not sure whether we’d manage to collect a comprehensive selection of presidential candidates for voters to elect a president from. But man, wouldn’t it be amazing, to play a part in appointing someone you felt could lead the country wisely. I’ve dipped into the Facebook posts about the party and read some of the comments: some are supportive and constructive, and others are just blech – cynicism can be so very ugly.

The presidential candidates in the States made me think of a blog I wrote a while back (how old is too old). How come presidential options in many countries are all beyond normal retirement age? I still don’t get how someone is allowed to run a country but would probably not even be considered for the position of leading a multinational corporate. Are young people not interested in leading a country? I mean, I sure as heck would not want that job, in any country, but if I did, we’d literally have no money left for the fat cats, as I’d be feeding, housing and trying to find ways to empower the poor…and fixing the infrastructure…and cleaning the rivers…and and and… I don’t know enough about the Democratic candidates for number 1 and number 2 in the US, still, I definitely know where my vote would go. I must admit I’m quite surprised when someone I know or interact with turns out to be a Trump supporter…that man is definitely not from my tribe.

And speaking of fake tans… the weather here has started improving enough for me to think about shedding a few layers. I decided to give my light blue legs some attention just in case I have the opportunity to venture outdoors in shorts. I discovered that hand sanitiser (the alcohol spray version) has an additional benefit of being able to remove the quick-setting, tell-tale fake-tan stains on your hands… So, if you don’t happen to have mittens with which to apply a healthy looking colour, now you know.

Other than visiting with my folks, a bit of writing for reward and daily doses of fresh air, Bruno has continued to entertain me this week; my French lessons are going well (although I’m about six years from fluent); and I have a hair-dressers appointment this coming week. Never thought that this would ever be as big a deal as it is right now.

There’s a lot of animal action around the neighbourhood at the moment. In particular in the wee hours of the…

I had the strangest dream… I was arrested. It was a false ID, but the arresting officer made a point…