A week of firsts

People have been asking what motivated my decision to come here, and I’m not sure there is a simple answer to this. My getting here feels part of a natural progression and after a week in the Port of Dakar*, I’m already feeling strangely settled. If pushed I would probably respond that I felt the need to be a part of something that is having a significant impact (on an individual basis) but is also working towards a sustainable impact on a broader level. Mercy Ships also do medical capacity building in the countries they serve – and I’m excited to learn more about this. 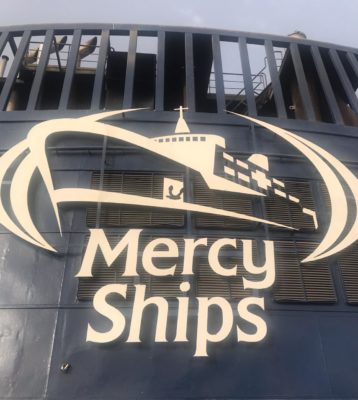 I found out about Mercy Ships about two years back, from a guy from New Zealand. He had just finished a year on board as an electrician and was doing a paragliding course in South Africa. I was visiting friends, and Nathan spoke about Mercy Ships at the B&Bs breakfast table. I was really fascinated, especially by the fact that I could use my skill as a writer to become involved in this level of humanitarian work. It took me another year to do some more committed research, and when I applied, it was for the role of writer in the communications department.

Last week’s blog may have painted a “Chrissi’s on a cruise” picture in your minds, but I know that most people are aware that this is a hospital ship, that mainly serves the countries in West Africa. The best way to describe the eight deck Africa Mercy is that she is a village on the water. And located on deck 3 is the fully-fledged hospital in which the volunteer surgeons and nursing staff come to work their magic – on board and on land. In my mind, all of us other volunteers, are here to support or enable the ship’s healthcare goals.

I first visited the hospital this past Monday and have since returned to the wards daily. A few more patient-related firsts included me familiarising myself with the admissions process, the first visit to the rehab tent on the dock, as well as a first patient home visit on Friday (the little guy is being admitted on Monday for his cataract op). The communications department utilises various programmes and tools to track stories, so I’ve also been getting on top of the technology. I’ve done my first load of washing on board, and I’ve met just about a gazillion people for the very first time this week too.

I imagine that while the surgeries are underway, the ship’s weekly rhythm is similar week-in and week-out – it is just the type of procedures that rotate. This past week the surgeries (that I’m aware of) have been plastic reconstructive (burn contractures) and eyes (mainly cataracts). I will soon be writing about two young cataract patients as well as an eleven-year old girl who fell into hot oil as a toddler. Her arm and hand were severely burned and disfigured. She was operated on mid-week and has been resting and sleeping since.

At the beginning of January there were also a number of orthopaedic surgeries, and I’ll be writing about a five-year-old girl who had windswept legs. She is currently wearing brightly coloured casts on both legs and has managed to wrap the entire communications team around her little finger. She was discharged from the hospital today, and will be staying at the Hope Centre, a Mercy Ships facility for patients who are from further afield, and cannot travel to and from the ship between appointments.

I’m still figuring out what I’m allowed to share on my blog, in terms of patient stories and photographs, especially before the organisation uses them. I’m hoping to share a photograph of the little girl who had her cataract operation. She was discharged wearing funky little pink sunglasses and will be back in a week for a check-up, and then again in six weeks for her Celebration of Sight Day. What this event looks like, I’m not sure yet, but I’m hoping that at that stage she will have substantial sight – apparently, if children are blind pretty much from birth, it takes their brains a little while to figure things out (this statement is my interpretation of a medical fact… so please don’t take it as gospel).  At that stage I’ll also know what exactly I’m allowed to use for my blog. In the meantime, here’s a photograph of my nest… and up top one of Africa Mercy’s funnel.

There is really so much to talk and write about, and so much happening on and off board. I may just have material for thirty months, or so…

In terms of a quick emotional health check, I’m doing good. I’m calm, and a lot more familiar with the ins and outs, and what my role here entails. The cabin is still teeny tiny, but on Friday evening, after returning from my first patient home visit, I crawled into my little nest, and was lulled to sleep by the ship’s engine and occasional other squawks from the vac system.

It will still take some getting used. But in general, it is well with my soul.

*This week I learned that when I’m on the ship, I’m actually on Malta. Another first for me!

PS: If you have any specific questions about ship, the hospital, the volunteers, or anything else, please ask me in the comment section, or send me a WhatsApp. I’d be very happy to tailor write a blog just for you 🙂

Where does the time go?

It feels as though this week went by in a flash, and so much has happened – more new people,…

After three flights (Joburg to Dubai, Dubai to Conakry, Conakry to Dakar) and three hours in traffic from airport to…