Firstly, I feel I must apologise to Agaete for saying it had little green to offer. It has since been serving up little oases of green daily. I’ve also been told, by a visiting Brit, that it may rain this week and I’m sad that I’m going to miss that. I bumped into the camera-wielding Englishman on a rocky path, and established that he is a studier of, amongst others, the Great Gran Can lizard. Naturally, I asked if he’d already seen Tomato, and, of course, he has.

I’ve come across some interesting folks on the island – including a French tourist, who was a co-passenger on a nail-biting 101 ride along the GC-200; a Colombian, who lives and works here now, but travelled here via Norway; and a couple from Mali, West Africa who have a market stall at Puerto de las Nieves. I chatted to them while buying a sunhat that could weather the wind, while protecting my ears and nose from getting crispy. They have lived and worked on Gran Can for the past twenty years.

I have no idea or information on what their home country was like two decades ago, but I remember reading about the Senegalese military building a camp near Mali’s borders, so I assume there is ongoing instability. A few months back I also read The Beekeeper of Aleppo which tells the story of refugee movement from Syria to Europe (tough read, at least for me). Add to my flimsy information base above the fact that hundreds of migrants from West African countries land on the Canaries every year, and you may understand why that shameful corner of my preconceived mind was having visions… Visions of a treacherous journey from landlocked Mali, including a precarious, scary and desperate time in a small-overfilled boat.

I casually asked him, how they had travelled here, hoping I wasn’t overstepping, but too interested not to ask. He looked at me a little strangely, answering: “The normal way. We took flights and had visas”. Boom! And as he dropped the mike, I decided that I needed to go and re-watch that epic 2009 TED talk by Chimamanda Adiche “The danger of a single story”. 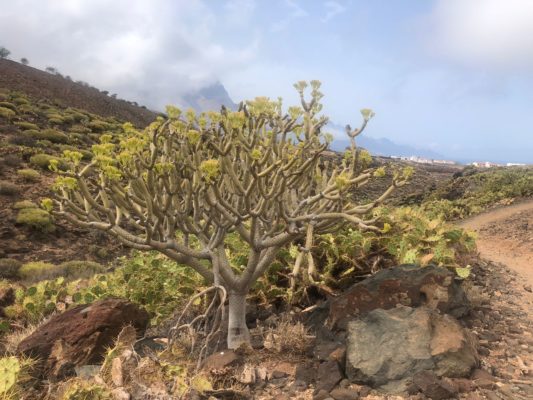 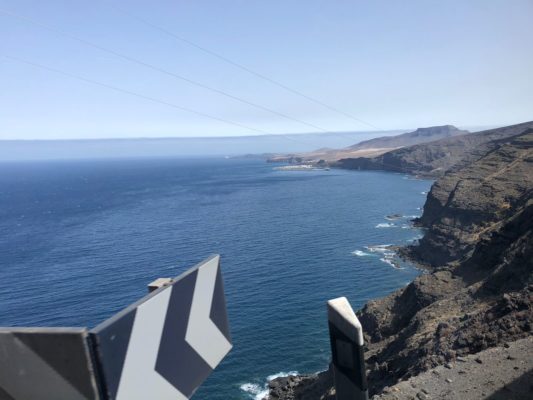 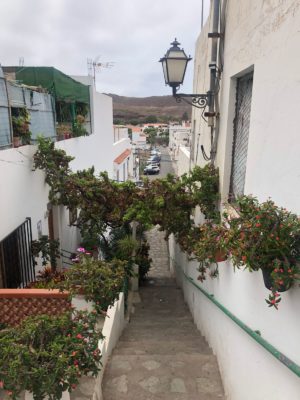 Sadly, my time here is nearly done, and what with all the distractions, I haven’t quite finished everything I intended to do – but as Trevor Noah says, in order to do comedy, you need to do life (or something similar). Anyway, I’ve tried to live a little, and not only hole up to write amongst other things, the first draft of my memoir. Yes indeed, a memoir!

It has been a particular treat chatting to people and seeing their faces when I respond to their question: “What are you writing at the moment?”

Yet another person:    “Are you dying?” (again, trying to look supportive, then horrified that the thought passed their lips).

When asked, I remind myself that there is no need to justify everything one does, and, in answer, I just smile sweetly… It will probably not be as successful as Eat, Pray, Love… although one can always hope, and you’d buy it, right? Most importantly, I do believe that the exercise of writing something like this, i.e., something that I truly enjoy writing for others, is going to make me better at what I do. For the most part it’s been rewarding, but it’s also been a hard and ugly slog on some days. It’s good to know how this feels. And how uncomfortable getting personal can be. And how one is rarely the hero of one’s own story.

I must add that writing is cheaper than therapy (could that be the sweet aroma of justification we smell?) – even though my experience of therapy is somewhat limited, and I of course, like so many others, definitely do not need expensive therapy. Having said that, coming away isn’t exactly for free, is it. But that’s beside my point… Focus. Back to therapy, and my limited exposure… Therapist One (relationship) told me that if I was their daughter, they would suggest I leave the relationship (spoiler alert, I did in the end). I think I heard Therapist Two (sports) telling me that I’m perfectly normal, but that I needed to redefine my relationship with a specific person. More recently, I believe that Therapist Three alluded to the fact that I was the problem, and a change in my behaviour was required to remedy a situation. Makes one wonder what conclusions a – I mean my (see, I’m still struggling to own it) – memoir may reveal!

But enough about me and my troubles (and truthfully, I am a big champion of therapy…).

Soon I’ll be donning a mask again, catching a bus (big yellow house on my back) and then a plane. Then I need to pass/fail a test again, so that I can travel back to South Africa, and be allowed back into a complicated country that I feel both loves and hates me. Nonetheless, I’m excited about what tomorrow brings.

What’s in the Yellow Bag?