Dusty. This is a good way to describe Dakar. And dry. It’s Harmattan season here in West Africa, which is characterised by dry and dusty winds coming from the Sahara. The city has been wearing a cloak of dust, even before I arrived in mid-January. The visibility has also been quite poor, although, there have been a few days that saw the haze lift to reveal Gorée Island and silhouettes of tall buildings (some still under construction) in the city. 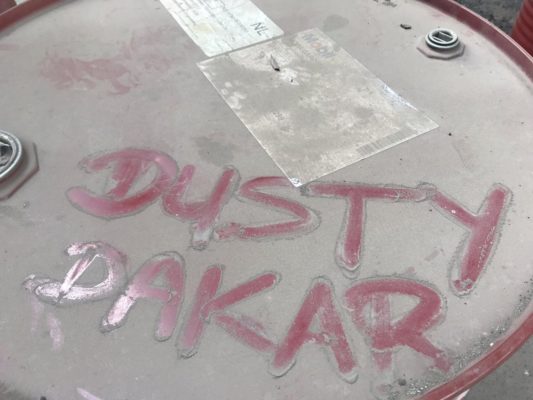 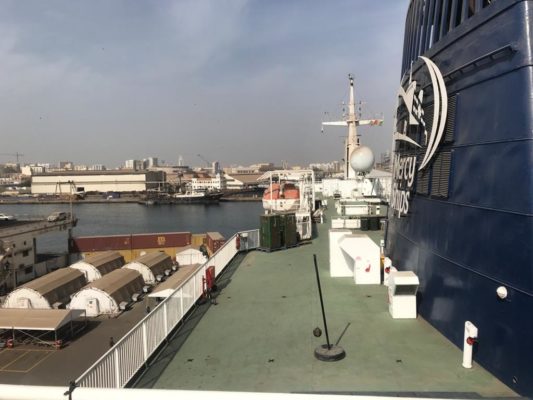 The dust and dry air aren’t great for contact-lenses, asthma sufferers or those with sensitive sinuses. Or those who suffer from dry skin, lips, scalps, or other dusty and dry climate ‘stuff’. In a way it’s a little like late winter (August) in Gauteng/NW, except that it isn’t. It doesn’t get very cold here at night – in fact I’ve been sleeping on top of my blanket most evenings (although that’s probably me just warming up the space between me and the ceiling quickly).

I also haven’t experienced the strong winds we have during season change back home, but I’ve heard that before I arrived a windstorm of note ripped through Dakar, resulting in a middle-of-the-night “all deck-hands report to your positions” tannoy announcement. Apparently, the storm left quite a lot of destruction in its wake, including uprooting a gazebo from the dock. The diving team found it during their routine clean-up of the ship’s underbelly, still fully assembled and well preserved in the salty sea.

There are a cluster of seven or eight tents on the dock in front of Africa Mercy. They include two waiting areas, a hand-washing/locker tent, an outpatient tent, eye screening, rehabilitation, and I forget what the other one is… The white tent-tops are a shade of dust. The top of the orange canopies on the lifeboats too. It covers everything that remains stationery and conceals the original colours of cars left parked for more than a few days.

If you walk through the port, into town, along the coastal road or through the markets, you’ll be treading on dust. It’s a soft kind of dust. The kind that lifts up in the lightest of winds. I’ve driven through the outskirts of Dakar in the early morning and have wondered if street sweepers have been through the streets – they looked so clean. But perhaps it’s the wind?

Often the general view is muted by this filter, but splashes of beautiful Senegalese fabrics, bags, clothing or art break the monotone. Or, it’s cracked by a beautiful smile, or the sound of a child laughing. Or by the bright scrubs the healthcare teams wear on a Friday. Or the neon casts the kids sport after their ortho surgeries. Or by the balloons above almost every bed in the wards, or those given to the kids as rewards for an extra hard work-out in the rehab tent.

This weekend I started reading Ships of Mercy, which tells the story of the Mercy Ships charity, from the birth of the dream through to 2012. I remember reading an article recently where Don Stephens was quoted as saying his inspiration for the charity was a son, a saint and a ship. In the book, he refers to meeting Mother Teresa about a year after the birth of his third child, who was both mentally and physically challenged. He had gone to Calcutta to see how her team cared for the severely handicapped in one of the world’s most impoverished cities (page 14). The below quote from the book really resonates with me:

“I’d heard that Mother Teresa had instilled in her followers a gift for focusing on each individual as if he or she were the only person in the world receiving such attention and concern. And that, I was about to discover, included me” (page 15)

Being seen and ‘known” is such an important part of being healthy. I think this is relevant for most, but perhaps even more so when you are suffering from a disfiguring ailment or burn scars, or a condition that no one can explain. People who are that ‘different’ are often outcast in society, so if/when they do get some sort of help, it’s often more than physical healing that needs to happen. This may be simplifying things to the extreme, but they also need to experience that “Mother Teresa focus” and someone wiping the dust off their bruised and battered self-esteems.

I think a lot of that dust gets blown off here, and every single patient is encouraged to shine.

Two of my new little friends were discharged this week. Fatimata, who had her cleft-lip fixed, and five-year-old Malick, who had his bowlegs straightened. Both of their moms couldn’t wait to go home, to introduce the “transformed” versions of their children to a society that used to mock them. In fact, Malick’s mom hasn’t told people back home that his legs are straight now… They’ve been gone from their village for well over two months and have kept it a secret. Just imagine that homecoming!

Speaking of homecomings… there is a lot of warmth, kindness and joy here, but of course I’m missing my family and friends and the feeling of being “known”. I’ve put in my leave for December this year, and will be coming to visit from Monrovia in Liberia, where the ship will be from August 2020. You heard it here first 😉

A lecture and a home visit

Today is a ship holiday. We have a long weekend every six weeks, and this is my first, so I’m…

Settle in, this is a long one…

I’d planned to write something deep about the various ‘bubbles’ of reality that are currently part of my new life,…