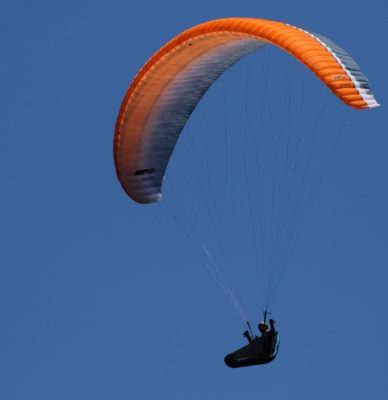 There are in fact many things that I used to be … probably as many things as I still am and as I will be. The fact that I no longer fly, doesn’t make my life any less rich. The real friendships I’ve made through flying have survived my divorce from this pursuit, and I do love catching up with people on a mountain. I’m probably one of the best recovery drivers you’d be lucky enough to have, however getting my nose out of a book and looking at a GPS may be a challenge. My name is Chrissi, and I used to be…

I used to be the SAHPA Chairperson. I lasted one year, after which I walked away. With the wisdom of hindsight, I must admit that I really admire people who put themselves forward to serve on the committee, particularly people who serve for longer than a year.

It was without a doubt the worst year of my life (let’s name it “The Small Depression”) and one which I embarked on voluntarily despite being pre-warned by a prior chairperson that it had been an incredible tough tenure for him. As they say: pride comes before a fall. I didn’t realise at what cost the delivery of this voluntary position would come. I don’t really think that much can prepare you for the total onslaught of new experiences (few of which are pleasant) that accompany serving SAHPA. My personal life suffered. My business suffered. My health suffered.

That year started with a bang, when a few weeks in a judge in Cape Town ruled (on an almost decade long case) that tandem paragliding for reward was illegal. After a few visits to our lawyers, we were advised to ground tandem operations (unsuccessfully) until we had lodged our appeal. It was a confusing time for many – unfortunately I was the one in the firing line. I had no prior exposure to the land of law, never mind the reams of the law of the air. There were key individuals who tried hard to support me, however, I needed knowledge to make decisions, so was playing catch up a large part of the time. Add to that the different voices and many warnings against various individuals and their “dubious ulterior motives”, and it was all a stark reminder of why I had left the corporate world to pursue freelancing.

Things may have changed, but like I said, I used to be… Back then an imbalance or tension had always existed between commercial and private within the ARO (Aviation Recreation Organisation). At one stage it seemed that the only solution to ensuring that commercial tandems were legal (as many people’s livelihoods depended on being able to fly tandems) was to make our ARO the ATO (Aviation Training Organisation). I came so close to taking this step, when a casual remark by a CIA representative, about how much responsibility this entailed, stopped me in my tracks. I decided it was a good idea to understand exactly what he meant, and to my horror discovered that as a director (voluntary or not) of a non-profit, and as SAHPA Chairperson, I would ultimately be responsible for all activities that occurred under the ATO. This was the one thing that no one had whispered in my naïve ears, and it was quite a wakeup call. In addition to a few more sleepless nights, I tried my best, together with the committee, to come up with ways in which we could ensure that we met our duty of care as directors of the ARO. One of a number of initiatives that came out of that chaotic time, was the In the Loop newsletter – and I can’t say that a little part of me isn’t flattered that it has been resurrected as a communication tool.

Other things I struggled with during the “The Small Depression” was that I could not understand why many tandem operators across the country were not interested in creating a sustainable platform for their businesses. Other challenges included getting our MOP rewritten into an acceptable format, then getting it approved by the members and then by RAASA. My committee and a few stand-up members were instrumental in getting this process going, however, the MOP was only signed off by RAASA in the following year thanks to Jon and his committee.

In terms of people, there were some real diamonds who got me through, both from within the organisation, as well as from outside. To be honest, I didn’t really struggle with any of the personalities or characters in and around the sport, but I did observe a lot of unnecessary, sometimes ugly disputes.

I struggled with making the time to run my business, as well as trying to meet my minimum standards of quality (in both my “jobs”). I really prayed hard that there would be no major injuries or fatalities during my time as Chairperson. Unfortunately, this was not to be, and the sport claimed two PPG pilots, and a young PG pilot.

Did I make a difference? Was it possible to even make a difference in a year? I don’t think so, and I do not really know. What I do know is, if faced with the choice of being SAHPA Chairperson for a year versus jumping out of a balloon, the prospect of 365 consecutive roll overs wins hands down.

I used to fly. And overall, I must admit that I loved it. It was the place I could escape to, a place to feel free, to just be and to lose time without wasting it. I’m not talking about the time lost sitting on the mountain waiting for the wind to be just perfect (which it seldom is). I’m talking about the time between take-off and landing where I wasn’t really conscious of my surroundings other than my fellow pilots, Mother Nature and staying up for as long as I could. It was a time I would be free from “real life” problems like deadlines, load shedding, infrastructure decay, work challenges, politics, relationship issues, poverty, racism, land reclamation … It was a time during which I chose to enjoy the privilege of free flight.

While I was still an active pilot, I tried to fly as much as I could, however, I have always considered myself to be a bit of a hobbyist who attended as many competitions as possible to make use of the infrastructure, and to increase the circle of flying friends. I was fortunate to travel quite a bit, have flown at a number of beautiful sites and met some great people in near and faraway places. Paragliding opened up an entire new world to me, including one where injury and death was a relatively common occurrence. 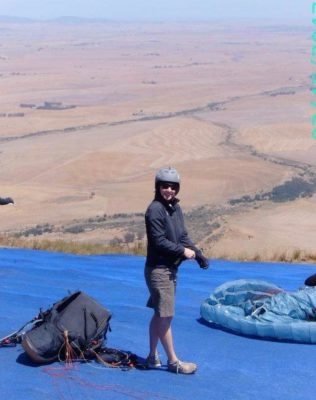 Sometimes I would surprise myself (and probably a few others) with a great flight, and there was a time I was more confident, especially while I was very current. I believe a bit of talent and some intuition, rather than the clever use of any science, got me from place to place. There were times that I was perfectly content in the air, and times that I was extremely anxious – more so about the conditions I was in, than the fact that I needed to find lift. There were times I would thank God for the incredible experience, and other times that I would promise Him that I would do or give up anything if he would just guarantee my safe return to Earth.

I used to be a licenced member of SAHPA. I say used to, because I neglected to let the thing be the thing. My flying wasn’t about flying anymore and there were too many distractions. It had become about serving the community, helping to organise competitions, raise sponsorship, write things, organise charity events, do this … do that … and my crippling sense of duty literally crippled my love of the activity and I walked away.

Notwithstanding I have and cherish some amazing flying memories. Maybe those are enough to see me through to retirement. Maybe they are not. Only God knows.

Note: This was written for the SAHPA March 2019 newsletter ‘In the Loop’. It is an unusually sombre (for me) piece of writing, so if you’d like to read a bit more about fun and real flying there are three articles here that may be more appealing.

Africa Mercy: My next chapter

Tomorrow in a month, I will be hopping on an aeroplane to Dakar, Senegal where I will begin serving as…

[vc_row][vc_column][vc_column_text] I was moving furniture on the Friday morning before the Monday evening flight, when I over-committed to a heavy…