After three flights (Joburg to Dubai, Dubai to Conakry, Conakry to Dakar) and three hours in traffic from airport to ship, I arrived on Friday night, safe and sound. It felt strange walking up Africa Mercy’s gangway – especially as I have seen it featured in many of the videos that I’ve watched these past few months. 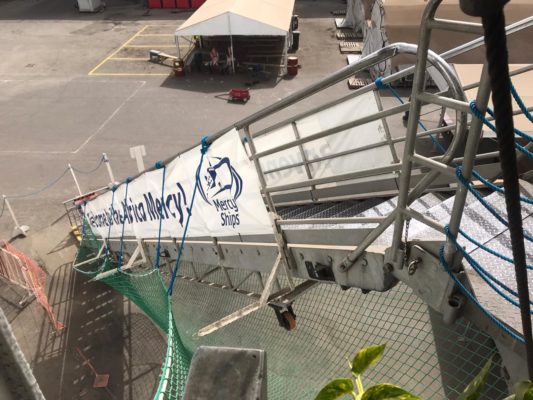 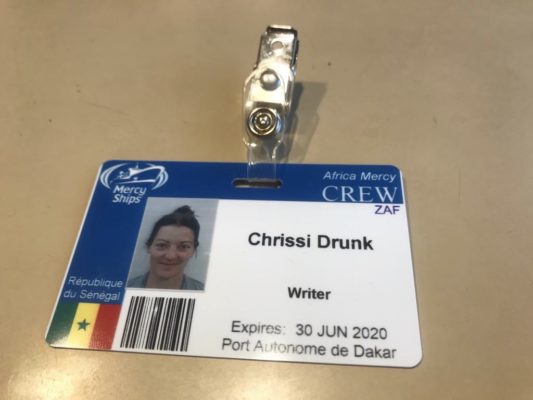 After a quick welcome and photograph, I was given my ID card and shown to my cabin – which is a four berth, with a small bathroom and communal area. It’s pretty tiny and will take some getting used to but luckily, as I discovered on my tour this morning, there are a lot of places on the ship to find a little quiet time.

I took my time unpacking and making my nest, as I want to be sure I’ll find whatever I need to, quickly. Even small places can become bottomless pits of mystery when there is no order (yes, that is the German version of me speaking). The person who was here before me left a lot of hangers in the cupboard, and after hanging up my super-downsized wardrobe, I’m still left with many. I doubt I’ll be needing them, so will take these to the ship boutique next week (sounds grand doesn’t it. I’ll let you know more after my visit).

At the moment I’m sitting in the library, which I think may just become one of my favourite places – it’s so quiet and peaceful, you wouldn’t think there are about three-hundred odd volunteers milling around somewhere on board. The most ‘congestion’ I’ve experienced so far is in the dining room at mealtimes, but it’s early days. There is a café area, a Starbucks and a ship shop, all of which I’ll share more about once I use these facilities.

There is also a gym downstairs, as well as a pool on deck 8, which I’ll probably visit for an occasional dip when it gets really hot, even though the air-conditioned ship feels rather pleasant. I’m taking doxycycline as a malaria prophylaxis, and apparently it makes your skin more sensitive to the sun, so another reason not to sunbathe. If this is the only side-effect I have to contend with, I’ll be over the moon! It’s still early days, so for more on that developing story, you’ll have to journey with me a little while longer!

During my 24-hour journey I was able to reflect on ‘things’ in a different way than before. I know exactly where and what I’ve come from, and of course I’m sad to have left so much behind. The future holds a large element of the unknown and I think it’s only human to be a wee bit daunted. My Mercy Ships knowledge is based on the communication materials put out by the organisation, the research I’ve done and the conversations I’ve had with only a handful of crew members. Now it’s finally time to form opinions based on personal experience, and I’m looking forward to writing from this new perspective.

It’s an exciting time, but yesterday, when I couldn’t remember my mercyships.org email password, I had a moment of “What have I done!?” Then my password came back to me and I opened my emails to find a story lead from my new boss. The doubt disappeared.

Everything else may be new to me but writing…that I think I can do!

A week of firsts

People have been asking what motivated my decision to come here, and I’m not sure there is a simple answer…