“I’m strong, I walk alone, and my legs are straight”

Six-year old Satou is a happy, sociable child who loves being around people. As much as she wanted to be an accepted part of her community, sadly her windswept legs often saw her being teased and rejected. “Satou is actually a happy child. She doesn’t like being sad,” says her mother Khady. “She is also strong-willed and determined and gets very upset when she feels that she is not respected.” Khady explains that the constant taunting made Satou feel ashamed and helpless, as though she was always the object of mockery – so much so that whenever she heard someone laughing, she immediately assumed that it was because of her.

Her little legs had begun to deform and bend when she was three. Her mother was dismayed and tried to find out what had happened to her daughter – had she fallen and injured herself while in someone else’s care? Was she suffering from some unknown illness? There was just no single event that Khady could pinpoint as being the cause of Satou’s disability. A visit to the traditional healer in their locality also resulted in a dead end. “In our society people assume witchcraft or disease, and they exclude such people,” says Khady. “I was worried about my daughter and wished that she could be like the other children in the village.”

Satou’s hardworking, god-fearing family was very disheartened. They work as subsistence farmers and are often barely able to make ends meet. Their livelihood depends on their annual harvest, and if it is poor, they struggle. “Life in the village where we live is hard, and every day we thank Allah for giving us food,” says Khady. “There was no money or means to spare to get Satou some help.”

Then, in late 2019, someone told Khady about the arrival of a Mercy Ship, and things began happening fast. After attending a patient screening event Khady was given a date for orthopedic surgery (to straighten Satou’s legs) onboard the Africa Mercy. “I have not dared to even dream that it is possible that my daughter’s legs can be straightened,” says Khady. “It feels as though the doors of heaven were being opened for her.” 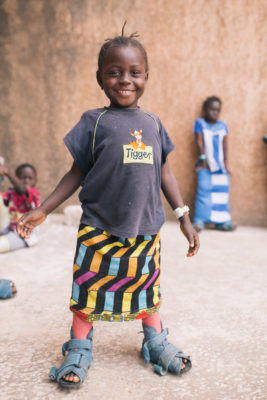 When Satou was admitted to the hospital, it marked the beginning of a new chapter – one of physical and spiritual healing – in her life. In the hospital, and later in the HOPE Center, she was accepted and loved by the volunteers and other patients. She was able to mingle with many other children who, just like her, had been outcast because of a physical disability or deformity. Other children who, just like her, had undergone orthopedic surgery. Who, just like her, were in casts and learning to walk again on their newly straightened legs. She was in a community and surrounded by friends – to play with, to encourage and to laugh with.

Once they were at the HOPE Center Satou would keep asking her mother for her walker, so that she could walk more. Sometimes she would stand, without holding onto the walker, and clap her hands and try to dance. Eventually she abandoned the walker and began moving around on her own. “When we spoke with her father, Satou told him: ‘I’m strong, I walk alone, and my legs are straight’!” says Khady.

Satou came to the Africa Mercy with windswept legs, and after her operation spent months with Mercy Ships – in the hospital, in casts, at the Hope Center, in casts, in the physio tent, in casts. And then finally the casts could come off, and she could really enjoy her new legs! The day Satou’s casts came off and she had her final x-ray, is a day that Khady will never forget. She says that seeing her daughter’s straight legs is her best memory of their time on the ship. “I thought: how is it possible for people to have the capacity to straighten legs that are crossed? It was magical – the kind of thing one can only dream of.”

Khady says she does feel very sad for the other children with bent legs in her village, whose parents were pessimistic and reluctant to come to the ship. She is grateful and relieved that she took the leap of faith to trust that her daughter would be well taken care of. And she is looking forward to returning to her family, with her healed daughter: “When I go home with Satou, it will be a day full of happiness,” says Khady.

Soon Satou will be home and getting on with living her life to the fullest… Gone is that sad little girl, who could not run with the other kids. “As every mother does, I am praying for her to be like others, return to school and to be integrated into society. I believe that she will now have an easier life – one that is full and successful.” 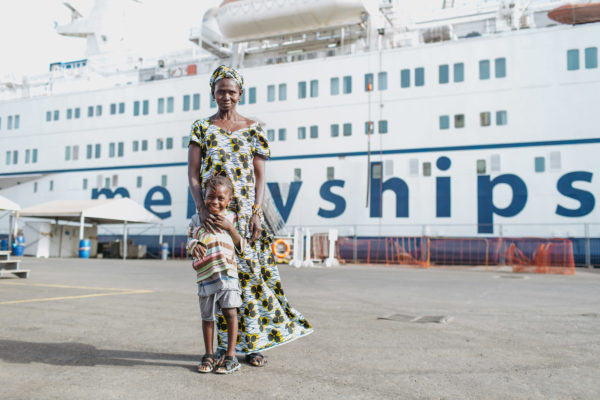 I met Satou shortly after her operation, and she had pretty much charmed most of the volunteers. She has a very big personality! This is the unedited version of her story. The before photographs used here were taken by John Seddon from the UK and the after photograph was taken by Lara Arkinsal from Australia.

Diacko was a handsome baby. In fact, the other villagers would stop Youma, while they were out and about, to…