I have written a number of stories for the “If rings could talk …” section of  Jewel-Art Africa. Rudi Cronje, the resident jeweller at Jewel-Art Africa, designs and crafts beautiful custom-made rings for his clients – and sometimes, as part of the crafting process, they gift their clients with a first person narrative, written from the perspective of the ring.

What has really struck me while writing these stories, is how unique the various journeys of each couple has been. Below is the story of Ivana’s ring. I hope you feel the love too.

As the sun rose over a remote black-sand beach in Hawaii, the early morning waves echoed its announcement of this new dawn.  Two figures quietly observed this age old ritual, standing so close to one another, that they could easily have been mistaken for one. As he stepped from their embrace she immediately missed his warmth, the cool fear of the unknown threatening to infiltrate the magic of the moment. Witnessed only by Mother Nature, the Creator, and a dark cloud of uncertainty that hung over them, Andrew pulled a small black box from his pocket. “Ivana,” he gently said, presenting her with a beautiful, black diamond stone. “Will you be my wife?”

Perhaps the most poignant point in my story, is the moment that my unusual centrepiece was presented to Ivana for the very first time. Andrew had flown my black diamond in especially for the occasion of being gifted to this amazingly brave and spirited woman. It is a moment the three of us will never forget, and it was the epilogue of a tender love story, the chapters of which are still being written.

A chance face-to-face meeting between Andrew and Ivana at a Phoenix hospital, resulted in a Facebook friend request, which quickly blossomed into something very real. Their shared passion for the outdoors saw them spending more and more time with one another. Their adventures included viewing the world from the top of a number of beautiful mountain tops, and as the year went by, the two fell deeper and deeper in love.

Then, in February 2015 Ivana suffered a broken shoulder during a paragliding mishap. This seemed to set the tone for the year, as after a surgery in April 2015 she was diagnosed with cancer.

Ivana was just a week away from boarding a plane for a highly anticipated girls trip, and in spite of the sombre mood, she decided to stick with the plan. Andrew wanted to support her at a time like this, so he cancelled a long planned paragliding trip, and joined her five days into her island holiday. They rented a cottage on the shores of a secluded beautiful black-sand beach, where they would not be disturbed. The couple spent a few bitter-sweet days in this glorious paradise, preparing for the battle that awaited them on their return to Arizona. It was an emotionally charged, highly spiritual time, during which the bond between them strengthened as each day went by.

On the last evening of their stay a mysterious UPS box arrived on their remote doorstep. Under normal circumstances Ivana would have been curious, however at the time she was so preoccupied that its arrival almost went unnoticed. As the last morning of their trip dawned Andrew insisted they rise early and go to the beach to watch the sunrise. He wanted the end of their trip to mark the beginning of a new chapter in their lives together … And as he presented a black diamond (the toughest form of a natural diamond) to his warrior wife-to-be, the first words of my chapter in their story were written.

The newly engaged couple and my gorgeous black stone returned home to face the storm. Ivana had two more surgeries and began seven months of chemotherapy. During her twelve chemo treatments she was so ill, that she was unable to work. She may even have given up hope had Andrew not continually distracted her, by taking her on little adventures between treatments. They camped, took a family trip to Panama with his kids; went on paragliding trips; an excursion to the beach in San Diego; and trekked through Yosemite … Andrew ensured that Ivana’s cup was always full and the breath-taking scenery and fresh air nurtured her spirit, fed her soul and gave her hope to continue with her fight.

While Ivana struggled to beat the cancer, my black rock waited patiently, silently willing the battle to be won. There was no rush to find a setting for my diamond as, just like Ivana, it had to be one-of-a-kind. One day, after her surgeries and well into her chemo, Ivana and Andrew found themselves on a gorgeous mountain top in the Sierra Nevada for the 2015 US Paragliding Nationals. It was here that destiny intertwined their path with Rudi, a South African born ring maker.

Whether it was the shared experience of the dreaded C, their love of the wondrous mountains, or  simply because they were kindred spirits, Andrew and Ivana knew that they had met the man who would interpret Ivana’s vision to create a piece of jewel art.

And so, my stone found itself in a UPS box again, this time en-route to Utah. My design was inspired by the spectacular black sand beach in Hawaii, where the promise of forever was first made. My shape is organic – reminiscent of the ocean that glistens in the reflected rays of sunlight, and constantly changing colour with the rolling tides. Once Rudi had sculpted his work of art, I travelled back to Phoenix, with the black diamond firmly ensconced. I was ready to make a statement. 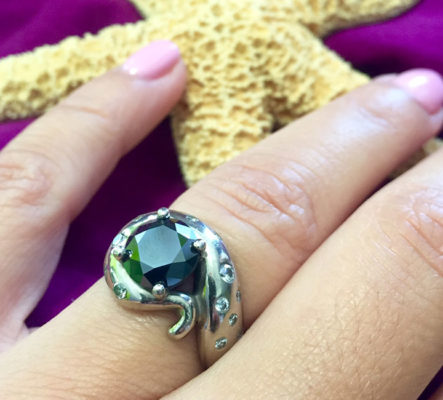 The three of us reunited at the very same Phoenix hospital, in the very same place where Andrew and Ivana had first met. The circle had been completed, and I was never to leave her hand again.

Determined to make 2015 the most significant year of their lives, they set the date for their vows. On 11 November they gathered their dearest friends and Andrew’s beautiful children and headed to Mingus Mountain in the Black Hills mountain range. Ivana donned a white dress and a furry white hat; they tied the knot; and then we took a leap of faith – a tandem paragliding flight off Mingus, marking the beginning of the next chapter of our bold mission through life.

It’s been a good while since that special day, and I still catch people’s eyes. Occasionally they will compliment Ivana on her ring, some ask questions. She always smiles back, saying ”Thank you … it’s very special, and it’s one of a kind.”

Hello, my name is LoFo

Hello, My name is LoFo, which is short for Lost and Found. I was born in the Kruger National Park,…

[vc_row][vc_column][vc_column_text] INTRODUCING ANNIE - BRAND MASCOT: Annie grew up on a working farm in the Free State, with four brothers…