Settle in, this is a long one…

I’d planned to write something deep about the various ‘bubbles’ of reality that are currently part of my new life, but I want to back my bubbles up with some photographs, that I don’t have yet… Hopefully I’ll have what I want by next week, or the week after.

Before I look back on my week, I’ll start by answering some questions I’ve been asked by one, or more of you.

How long is Africa Mercy (AFM) in Senegal?
AFM has been moored in the Port of Dakar since mid-August 2019 and will be here till sometime in June 2020. It’s the second time Mercy Ships has been to Senegal. The ship will sail to Las Palmas in June where she will be in the shipyard for a few weeks of maintenance to ensure she is fit and ready for the next field service. We’re not sure yet where exactly that will be, but I’ll let you know as soon as I know for sure.

Where are you when the ship is in the shipyard?
Some of the crew stay onboard, or book accommodation if their budget allows. I’m not sure if the ship will come out of the water for this year’s maintenance. I think that changes things for people living on board as well and will find out more about that closer to the time. It won’t really affect me this year though, as I have to go to Texas for some training (called onboarding) that starts on 14 June 2020.

How come you’re going to Texas?
The training lasts for about five weeks and is supposed to help prepare me for life on the ship and living in community. In terms of exactly what topics are covered, I’m not quite sure, but it will include insight into the Mercy Ship’s mission as well as faith foundations, personal and interpersonal development (one of mine is that I’d like to learn French).

Ideally this training should have happened before I started my time onboard, as it’s a requirement one has to fulfil if one has committed to more than a year with the ship. I think there may be some fun activities too, like learning how to fight a fire and other skills that can help me contribute to my AFM village.

As an aside, the ship has a dive team that ‘cleans the underbelly of the ship’ every two weeks, and I could kick myself for not doing my refresher dives to get current last December when I had the opportunity… Not all is lost though, as there is a dive centre in Dakar, and I’ve just emailed them to find out about getting my dive status to current. Exciting, right!?

Okay, let’s get started on my week…

Monday is the day where there are a lot of meetings. Each Monday starts with a 07h45 operations meeting in the International Lounge. We’re told about what’s happening in the week ahead, such as what operations are taking place in the hospital, if there are any media trips, or VIP visitors, feedback on any other operational ‘stuff’ – for example, we’re hoping to find out where the ship is in the next field service tomorrow… This will be breaking and long-awaited news!

There are two more Communication Department meetings on Monday’s – one where the team on board gets together to discuss the week ahead, and another later in the day in the form of video conference with Texas, during which we mainly discuss content, patient stories and deadlines. 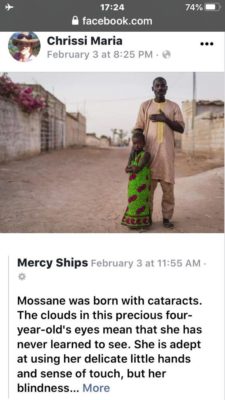 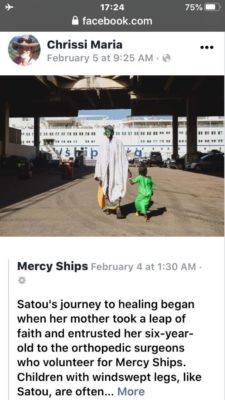 Highlights this past week included some interactions with patients that I’m writing about. If you’re Facebook friends with me, you’ll probably have noticed that I shared two Mercy Ships posts – one about Satou (windswept legs) and another about Mossane (cataracts). I’ll only be sharing the stories that I’m personally involved in writing, so if you see me share something on Facebook, you’ll know it’s one of my little friends. I say ‘little’ friends as I am currently only writing about children – the youngest is one-and-a-half (Fatimata) and the oldest is 11 (Dieynaba). By the end of our field service here in Senegal I will have written a full-length story about all of ‘my’ patients, but the publication dates may fall later in the year. As soon as I’m allowed, I’ll publish my stories on my blog. I’m excited for you to read them.

Other highlights of my week included making a few new German friends, one of whom left the ship yesterday. Jörg worked in an IT capacity on board, and though I’m sure he was very generous with his Germany efficiency and directness, I think an incredibly interesting aspect to his story is that he’s about to set off on his bike ‘through Africa’. Okay, not quite through Africa, but across a few borders and to Ghana. 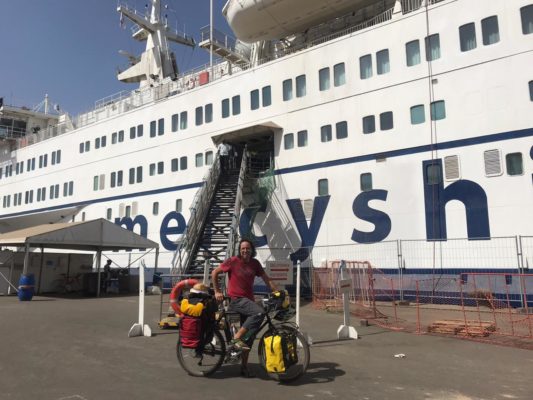 Through him I also met a German couple who works at the German Embassy Dakar (my first official land-based friends) as well as an independent film maker who is involved with another NGO that was started by two Lufthansa airhostesses here in Dakar (it’s a good story so have a look here if you’re curious: beta.sagehospital.org). 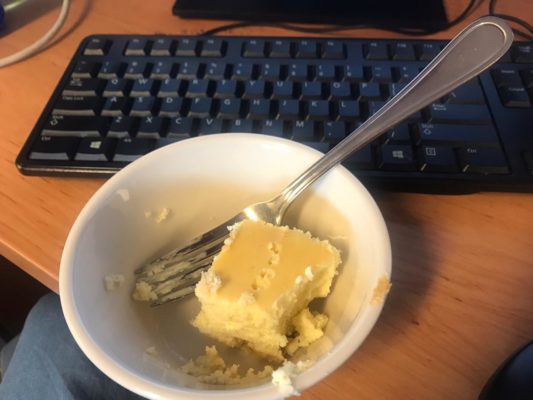 I also met the young Swiss lass who bakes our bread onboard and recently blessed us with some cheesecake (high up in the 101 on how to keep Chrissi happy). Turns out she is from a place not far from where my sister stays in Bern, Switzerland! And then, while queuing to pay for my loo roll and washing powder at the ship shop, I started chatting to a doctor, who is here for three months, and also comes from Bern. She’s also visited South Africa often, so there was a lot to talk about! Unfortunately, I had to dash, as we have to book specific times in the laundry, and if you snooze, you lose i.e. if you are late, someone may grab your machine, and you have to book another spot. 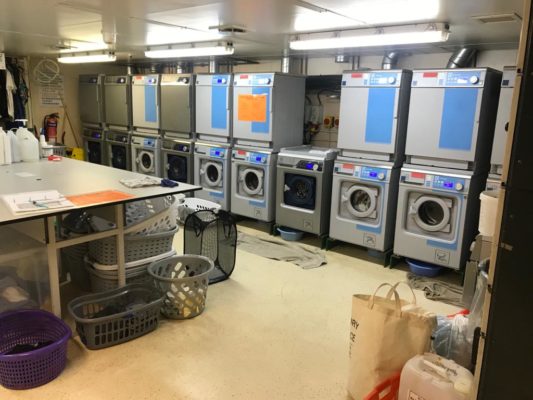 A few hours ago, while I was making a toastie in the dining room, I got chatting to two of our day-crew who work in the galley. The ship’s day-crew all hail from Senegal (mainly the capital) and don’t live onboard i.e. this is a day job for them. I’m not sure how many AFM employs, but they are really key to our being able to function properly here, as many work as translators in the hospital wards and admissions. The majority of them are post graduate students, either studying their masters or even PHDs – law, languages, diplomacy, history…intimidating stuff! One of them smilingly said to me that it’s a bit of a competition here, i.e. who can attain the highest level of education. I think there’s a good story there, and I’m hoping to write it soon.

My weekly health check? Apart from feeling like I’ve under performed on the education front, I do feel that this current chapter at the university of life is going to be a great one. I’m excited for the week ahead, and everything new that it will bring.

If you’d like to, or are able to support me in any way, please visit my supporters page here.

Dusty. This is a good way to describe Dakar. And dry. It’s Harmattan season here in West Africa, which is…

Where does the time go?

It feels as though this week went by in a flash, and so much has happened – more new people,…