The “things” in Zackaria’s eyes

When they were given a date for cataract surgery onboard the Africa Mercy, seven-year-old Zackaria asked his mother: “Is it possible to remove the white things in my eyes?” To which Binta replied “Yes my son. God-willing, that will be possible.”

Zackaria is the second youngest of five. He has three sisters, and a thirteen-year-old brother Elimane, who was also born with cataracts. After Zackaria was born Binta began seeing the same signs she had seen in her eldest. “I knew about Zackaria’s eyes when he was still very young, as I had the same experience with my first born. Elimane had an operation, but his surgery was not successful” says Binta. “I wept when I saw that my new baby was looking and moving, in the same way.”

She knew that she was in no way to blame for his poor eyesight, but the fact that both her boys had been born with cataracts caused a lot of stress, and she became quite ill. “It’s hard to move around if you close your eyes for just a few minutes. Imagine what it is like for a blind person.” she says. “It is the reason I kept crying.” Her mother stepped in and offered to take the two boys to live with her in Casamance, so that Binta could focus on getting well.

As Zackaria grew up, he was aware that he could not see like other children, but still wanted to live a full life, including playing with other children and even being ambitious enough to try and kick a football. Sometimes his grandfather would try to stop him playing, but a teacher encouraged him to let the boy play, so that he did not dwell on his disability. Zackaria would sometimes come home sporting scratches and bruises from his escapades, but even those could not dampen his inquisitive nature and zest for life.

While Binta was visiting Cassamance the family heard of the Africa Mercy’s pending arrival on a local television channel, but they did not know what treatments would be offered. One day Elimane came home and told his mother to take him and Zackaria to the hospital. “There are some people coming for free surgeries for the eyes,” he had said to her. Binta took her boys to where the patients were being selected. Sadly it was established that Elimane could not be operated on – he had been blind for too long, and the chances of a second surgery being successful were very slim.

For young Zackaria, however, there was hope for healing. He was given a date on which he would be admitted to the ship’s hospital and Binta was elated. “The family prayed for the ship to be blessed, and that the operation would be successful,” she says. And to ensure that they would be closer to the ship for the surgery and follow-up appointments, she moved in with relatives in Keur Massar, on the outskirts of Dakar.

Zackaria was incredibly excited about having, as he terms it, the “things in his eyes” removed. He was in a great hurry to see and began counting down the days to his surgery. Every day he would come and ask his mother, how many more days it was. Four more…three more…two more…one more… Finally, the day of the operation dawned.

When they were admitted to the hospital onboard the Africa Mercy, Binta knew that his surgery was becoming a reality. She says that while she was afraid, she also grew more confident: “It was hard, but I put things in God’s hands.”

In a blink of an eye, his operation was over. Zackaria was discharged the day after surgery, and asked to come back a week later for a check-up and some eye tests. In young children, who have been blind for most of their lives, the brain needs to learn how to interpret the new electrical signals arriving from the eyes.  The doctor was really pleased with his progress thus far.

Six weeks post op and Zackaria was back for a final checkup and for the Celebration of Sight ceremony held on the dock. He was given some spectacles to help him focus, and had so much fun joining in the celebrations! “Now Zackaria can see better, he hardly stays still and is constantly moving about,” says Binta. “I am so happy. I never thought that Zackaria would have this opportunity for surgery. Even I was suffering from something that Mercy Ships has healed!” 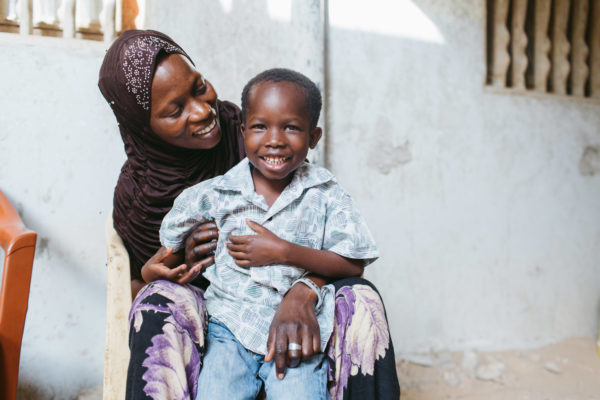 If it was up to Binta to decide what Zackaria would become, she says that she would want him to be a surgeon. “To help people as people have helped him.”

As for Zackaria, his main ambition right now is to play outside until the sun sets… and to be a mason and build things. He’ll be off to school sometime soon, and then a whole new chapter of his life will begin.

The above is the first patient I met when I joined the Africa Mercy in Dakar in January 2020. This is the unedited version of his story. The photographs used here were taken by Lara Arkinsal, a photographer from Australia.

A lifetime of change, in just twenty-six days

Eighteen-year-old Khady’s face lights up as she keeps a close eye on the movements of her first-born. Fatimata appears to…