Who made your cheese?

It was high time for me to escape for a while, so I Jet-Jane’d it out of there post voting on the third of August. I’m now safely ensconced in the Swiss mountains, occasionally dipping into a news channel to see how coalition talks are going. Of course we don’t do things simply in the republic – there’s always got to be a bit of “it’s complicated”. A coalition between any of the contenders should, in my mind, be very interesting.

But back to me… or as the title indicated, back to the cheese….

I’m lucky to have a family member who spends his summers in the Swiss mountains making traditional alpine cheese. My sister’s partner has been making cheese for the last thirteen years, so he knows his stuff. All the cheese-making action happens in this mountain hut that the cheese-maker and his peaceful herd of cows inhabit for about eight weeks during the summer. The cow barn forms part of the wooden structure which also includes a kitchen area (where the cheese cauldron lives), a cheese cellar, a pantry, a ‘Stube’ (sleeping/living room), and a dormitory style attic, to accommodate visitors. 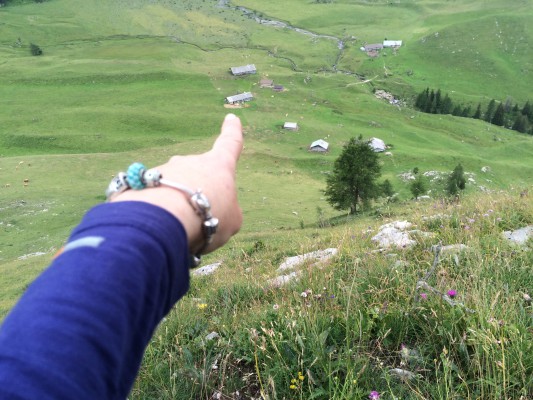 As magnificent as the surroundings are up here, working life is definitely not as fairy-tale as it may seem to the uninitiated. I’ve watched parts of the production process over the past week, and can bear witness to the fact that a combination of muscle, a strict daily routine, patience at the cauldron and good alpine milk yields the desired cheese quality.

The day starts around five-thirty. The cows, after spending the night eating the delicious alpine grass, come in around seven-thirty. They are milked twice a day. First in the morning and again in the evening, after they have spent the day in the straw, chewing their cud, licking salt, sipping water, pooping (a lot) and generally going about their cow-chilling-in-the-barn business.

In the lead up to lunch the previous evening’s and that morning’s batches of milk are magic’d, over an open fire, into a beautiful wheel (or two) of cheese. The cauldron is cleaned, a quick bite to eat, some chores, the cheese is turned. After the evening’s milking, the cows wander off to eat more of that succulent alpine meadow that makes their milk so good and plentiful. Then, the stable is cleaned, more wood is chopped, more chores, dinner and finally some R&R before it starts all over again.

The days are full, yet time moves at a more leisurely pace up here. I admire this age-old Swiss custom, and that, in spite of the fact that we live in an era of processed foods, this organic production continues. It’s refreshing to witness something that doesn’t entail mass production, and where there is such an intense focus on quality. There is something almost hypnotic about the ringing cowbells, announcing the arrival, departure or presence of these gentle herbivores. They also don’t seem to have a care in the world, apart from sticking with their family, and sticking to their routine. 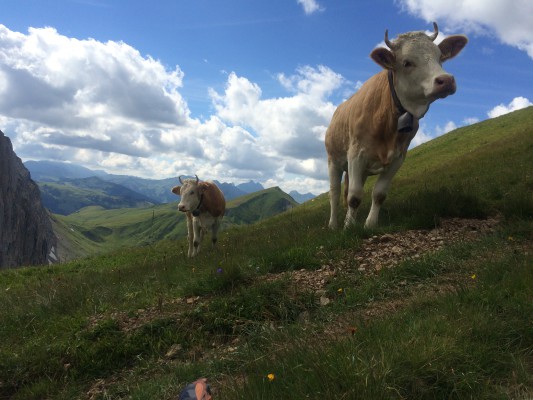 I feel like I should come up with some profound and philosophical insight into how this whole experience translates into my ‘real life’. Maybe along the lines of the best-selling Who moved my cheese by Spencer Johnson. But we’re not mice. We don’t all like the same cheese. Some of us don’t like cheese at all, and some poor folk are lactose intolerant. And why shift the focus to the moving, and not the making?

I’ve decided to liken the alpine cheese-making process to a labour of love, and its outcome as a gift or a blessing. I hope I bring a little of this peace back, focus on what’s important, and apply some of these principles to the cheese I magic up at home. 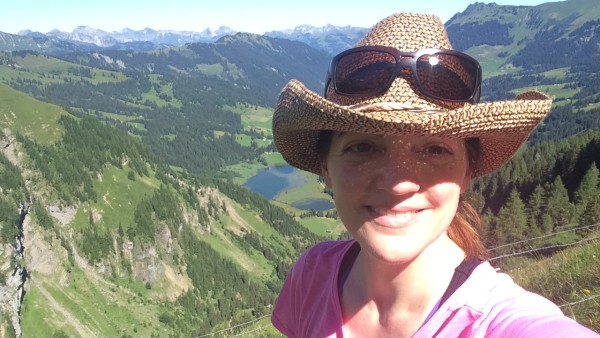 You could look at cheese-making from a capitalist perspective – but no-one’s getting rich up here. A socialist point of view – equal amounts of cheese for everyone? A modernist may say that its time to move on, no more touchy feely traditions. A traditionalist may fight for the status quo? Or maybe a coalition of some of the above?

Today, you get to make the profound connections.

Do you remember when we used to go on those crazy rollercoaster rides, scream with delight and want to go…

She looked at the ever-widening berth of her once streamlined cat. That’s it! As of tomorrow, it’s nothing but diet…